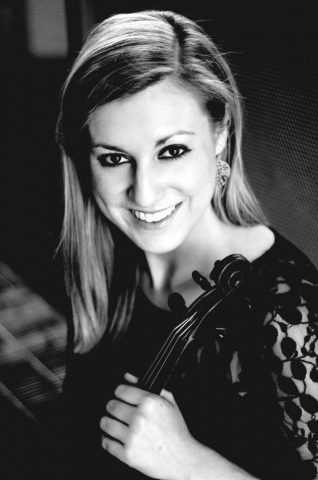 A native of Columbus, Georgia, Kallen O’Connor began her violin studies at age eight. Growing up, she was involved in many of the arts including music, dance, and theater. In May 2015, Kallen graduated as Valedictorian with a Bachelor of Music degree in violin performance from the Cleveland Institute of Music under the tutelage of Stephen Rose. The following year, she completed her studies at CIM as a joint student of William Preucil and Stephen Rose earning her Master of Music degree in May of 2016. Kallen has been a member of the first violin section of the Akron Symphony Orchestra since 2015. She is a member of the band Emily & Ivory and has served on the praise team at Parkside Church as a violinist and vocalist since 2012. She resides in Southwest Ohio with her husband, Sean, and their Siamese cat, Chloe.

Find out more about Kallen at stringtrax.com and to hear Marshall and Kallen’s performance of Schindler’s list (also on Spotify).